Nowadays, it is common for companies and businesses to drug test for employment. Some of the most commonly tested drugs include marijuana, cocaine, amphetamines, opiates, meth, oxycodone, heroin, opioids and opiates, PCP, tranquilizers, LSD and other hallucinogens. Employers conduct drug test by obtaining samples from your urine, blood, saliva or hair. Companies mostly use a 5-panel drug test that detects the following substances in your system:

You may, therefore, be required to present yourself to a different area for the test or the company may ask for a sample obtained under supervision. However, some companies do not supervise their sample collection, especially when conducting urine tests. So, some people may take advantage of this and swap samples. Drug testing ensures that the employer, employees, and the workspace is safe. Screening workers for drug usage helps to prevent accidents, health problems, and financial losses. 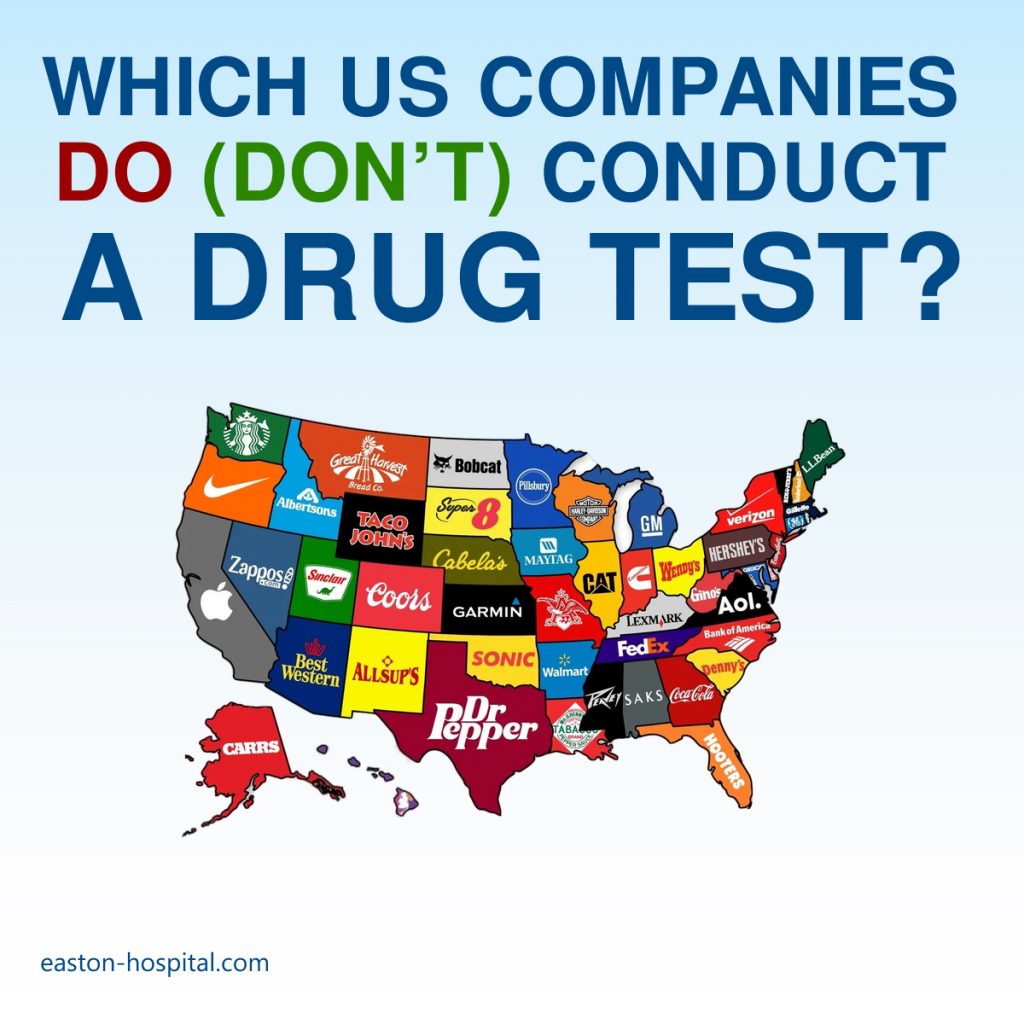 Various companies also conduct drug tests to avoid litigation in case anything occurs within the business premises. They can use employee drug test results to defend themselves in a lawsuit. Additionally, these tests help employers to create a productive workforce for their companies and businesses by curbing absenteeism. Drug users may not perform optimally compared to non-users. They may, thus, end up being a liability to the company as it costs more to retain them and pay salaries while they remain unproductive. In this regard, many employers prefer for their employees and potential recruits to undergo a drug test to determine if they will contribute to the success of the company.

Pre-employment drug testing is a common practice in businesses all over the country but there are jobs that don’t drug test. For instance, Apple careers does not drug test. However, the company has a strict intolerance to drug usage and intoxication within their premises.

Most regulated businesses mandate pre-employment drug testing of all employees. However, it is not compulsory but permitted in the private sector as long as the companies abide by local and state laws.

You may also be required to take a drug test after having an accident at work. The company works with the assumption that the accident may have occurred due to intoxication. Sometimes, the company conducts drug tests if they suspect that a worker may be using drugs or is intoxicated at work.

It is legal for employers to require employees to pass drug test and take action if they do not comply or fails the test. Sometimes, companies will conduct random drug tests among employees. If you fail the drug test you may be terminated and lose your benefits.

If you take a pre-employment drug test and fail, the company may decline your application.

In certain instances, such as the Rose v. Berry Plastics case, a worker may receive compensation from the employer following a positive drug test. The court ruled that his employer should cover the costs of his medical treatment and give him temporary disability benefits. Even after appealing with the Oklahoma Workers’ Compensation Commission, the court upheld its ruling that Rose was eligible for compensation because there was no evidence to disapprove his claims about the circumstances of the accident.

In this case, the company, Berry Plastics, argued that Mr. Rose tested positive for marijuana and morphine after the accident. He was, therefore, ineligible for post-accident compensation. However, according to The Oklahoma Review, the court sided with Dillion Rose by stating that marijuana use did not cause the accident after Rose admitted to smoking marijuana the previous night. They maintained that the presence of traces of marijuana in his system did not indicate that he was intoxicated at the time of the incident. A supervisor and manager also testified that they did not witness any indication that Rose was intoxicated when they interacted with him before the accident.

Dillion Rose’s left hand was caught up in a ‘guillotine-like’ machine and was completely crushed. The machine was off when he put his dipped his hand to retrieve a piece of plastic stuck inside. The injury occurred when a coworker switched on the machine roller. Even though he knew that sticking his hand in the machine was risky, Rose stated that he was of clear mind when he decided to retrieve the plastic stuck in the machine. After testimonies from a manager, the court ruled that there was no connection between Rose’s marijuana use from the previous night and the injury.

If you were wondering does Aldi drug test, then you must know that you will be required to submit samples at a separate location from the interview place. Only candidates who pass the drug test get called back for jobs.

Does Lowes drug test? Yes, Lowes tests new recruits and also when an accident occurs within their premises.

The company not only conducts pre-employment drug tests bit they will also conduct a random Walgreens drug test when they suspect an employee of using drugs.

Does Walmart drug test? Yes, but not every position will require you to take one.

If you are wondering if Starbucks does drug test or if you need to pass a target drug test then here is your answer. The following are companies that do not require you to pass a drug test before employment.

So, if you were curious and looking for answers to questions like does target drug test or wondering if you have to take a dollar tree drug test before getting a job then the simple answer is NO.

Drug testing in the workplace is slowly but surely fading away and it is only a small percentage of companies that still do it. According to a recent study, there are fewer than 2% of jobs that demand drug tests prior to hiring. In reality, there is just one American city where the employment rate is higher than 2.4%.

A false positive occurs when you test positive for a drug you did not take. According to some studies, 5 to 10% of tests may produce false positives. These instances can be attributed to various factors. Methamphetamine and amphetamine traces are frequently detected in false-positive drug testing. This is because a lot of over-the-counter medicines always lead to false-positive results for these substances. These may include some antidepressants, some cough medicines, ADHD medications such as Ritalin (methylphenidate), mouthwash, poppy seeds, some antibiotics like Quinolone and Rifampin, Anti-Inflammatory Medication such as Ultram and Tramadol, Antihistamines including Benadryl, Tylenol PM, Advil PM, HIV medication like Sustiva (Efavirenz), and Antipsychotic Drugs such as Quetiapine and Chlorpromazine. There are several other prescription medications that can lead to a false-positive drug test.

There is no sure way of knowing which kind of jobs conduct drug tests but there are some that are more likely to do it than others. Most jobs that concern public safety are more likely to drug test. Positions in the following fields may need you to take a pre-employment and take a test in certain circumstances:

The Substance Abuse and Mental Health Services Administration has clear guidelines for positions that warrant drug testing. They include:

There are jobs that are not listed as testing roles but you may still be required to take a drug test to ensure that critical duties are not carried out while under the influence. They include:

Some chain stores and other companies in the private sector may conduct drug tests but this may only apply to some positions. It is best to find out about the drug policy at your company of interest before applying and take the necessary precautions to avoid a positive result.